Here is a film that manages to leave several impressions at once. Its genius is that, while some of those impressions may only be gleaned on subsequent viewings, all of them feed into a single, masterful depiction of a world that Lasseter and company poured their hearts and souls into for a number of years. A more poignant look at old age, in my opinion, even than Pixar’s own Up, Toy Story 2 is undoubtedly the most cheerful film about bodily decay, obsolescence and abandonment I’ve ever seen. But make no mistake, this movie has something to say about those subjects. 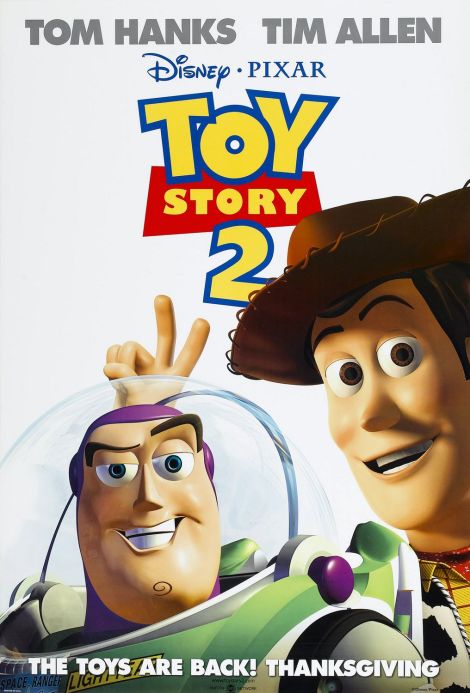 The decaying, obsolete and potentially abandoned character at the center of this sequel is Woody, also the central character of the first film. Buzz Lightyear, his nemesis in the original, gets to take on the role of a classic hero this time, leading the expedition to rescue the kidnapped toy sheriff. But the dramatic choices belong to Woody, the main one being whether to stay with his owner Andy and be played with for a little while longer, or to become a museum exhibit and be appreciated for years to come. The second choice offers a sort of immortality, an escape from seeing the child who loves you grow up and lose interest in toys. On the other hand, Woody would never be played with again, shielded behind a glass case forever. 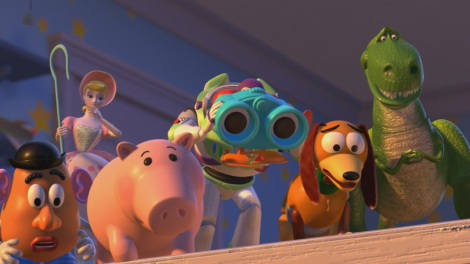 Complicating the issue further is the fact that Woody happens to be part of a set. He is a piece of memorabilia from a Howdy Doody-esque children’s TV show from the 50’s. His kidnapper has already collected the other characters from the show: “the yodelin’ cowgirl” Jessie, Woody’s horse Bullseye, and Stinky Pete the Prospector. They’ve all been trapped in a packing box for some time now and are overjoyed that the trip to the museum is nigh. Pulling the rug out from under them might be just as selfish of Woody as leaving his old friends behind so he can bask in the glow of his newly discovered celebrity. First he tries one option, then the other, but neither is acceptable. 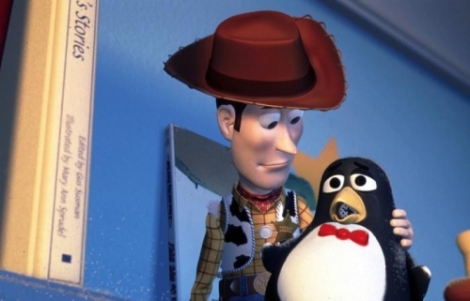 Cannily, the screenwriters (Andrew Stanton, Rita Hsiao, Doug Chamberlin and Chris Webb) convey the theme of time passing us by in three different ways simultaneously. First, there’s the certain fact that Andy will outgrow playing with toys eventually. In the film, this is merely suggested as a future event, besides the fact that Andy now owns a video game console. But in a way, the countdown is more sinister for being silent — and let’s not forget Jessie’s story of the child who stopped playing with her, told only with images and Sarah McLachlan’s voice. Second, there’s Woody’s dislocated shoulder. Much like the first film, Toy Story 2 is an extended exercise in inhabiting the mindset of a toy, and in that mindset, physical damage of any kind is psychologically devastating. Andy’s mother foolishly places Woody on a shelf where broken toys tend to be forgotten, leading the entire toy community to fear his condition may be terminal. The film gives us a fantastically realized nightmare sequence to hammer the point home. Third, there’s the metanarrative, implied in the first film and made explicit here, about the Western and Science Fiction genres in the history of pop culture. The other toys from Woody’s show have long since resigned themselves to obsolescence: no kid will choose them over Buzz Lightyear. No kid even remembers the show, not even Andy. Woody only managed to keep his career going in the first film when he chose to stop trying to beat Buzz, to accept that he wouldn’t be alone atop the pecking order anymore. Andy is generous enough to give both of them adequate attention, and in fact the glowing paradigm of humanity that is Andy unknowingly helps Woody find a solution to his dilemma in this film. 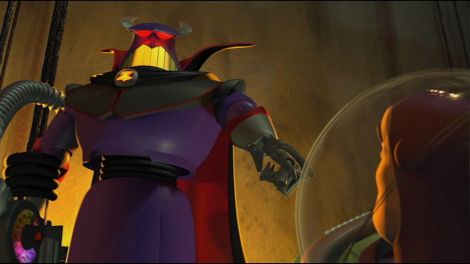 Along the way, we’re treated to one of the funniest films in the exceptionally funny Pixar canon. With so much heavy lifting, story- and character-wise, already accomplished in the first film, the jokes come hard and fast. The visual, often referential, humor has the greatest impact. Whatever else this film is, I think it’s definitely the greatest Star Wars spoof/homage ever made. Being a sequel itself, it takes special notice of an iconic scene from The Empire Strikes Back, but sound effects used throughout the trilogy are lifted in highly amusing ways. Allusions are also made to Goldfinger, 2001: A Space Odyssey, Airplane!, Poltergeist, This Is Spinal Tap, Jurassic Park, and many other films and shows. Those references will only cause a smirk or light chuckle, though. The guffaws come mostly from Buzz, or more specifically another version of Buzz discovered in a toy store who tries to get our Buzz back on the shelf where he “belongs.” Unexpectedly, the filmmakers bring back a concept from the first film — a toy that doesn’t realize it’s a toy — and they find so many new ways of making it funny. At every turn, this film avoids being redundant, instead coming across as inventive and alive. 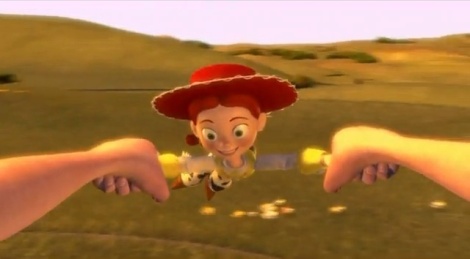 It’s a terrific sequel, in short, the kind that justifies the existence of sequels as Hollywood moneymakers. Toy Story created an imaginative and inviting world, and this movie brought us back there (and eleven years later, Pixar did it a third time). As any great sequel must do, this film expands on the themes and story of the original, fills in detail and incidents both past and future, and grapples with the fact that even longer-than-usual stories must end. Woody and Buzz know that life is not about saving or preserving ourselves; it’s about giving ourselves to others, letting them give themselves to us, enjoying life together. In a sense, Toy Story 2 completes a great two-part buddy movie, sending Woody through a similar journey to what Buzz went through in the first film — the journey from being wrapped up in one’s own mystique to letting go and living in community. Because of this, I still see Toy Story 3 as somewhat redundant, however brilliantly made. Not unlike The Godfather Part III, that film only plays out the events that were successfully foretold in the second part. Toy Story 2, all on its own, stares into the face of a kind of death and reassures us, “You’ll be fine. You’ve got a friend in me.”