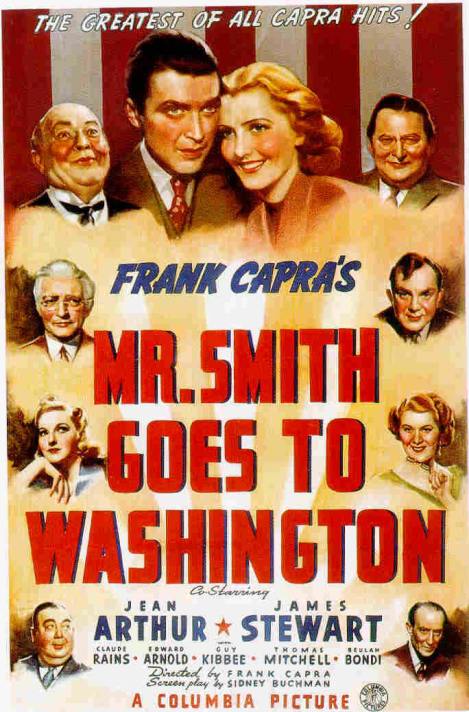 *This film opens with a familiar disclaimer: “The names, characters and incidents used herein are fictitious. Any similarity to any name, character or incident is unintentional.” I choose to honor that sentiment when I think about the film. Any real-world filibusters we’ve been reading about in the news recently are purely coincidental. I’d already planned on writing about this film over a month ago. After doing “My Favorite Movies” posts about Once Upon a Time in the West and Toy Story 2, I wanted to write about an older, black-and-white movie that I owned and hadn’t seen in awhile, so I could give it a fresh viewing. Capra was careful to keep the story vague/universal, not even naming the state that Jefferson Smith represents, much less his political party. Considering that, to my knowledge, we have no reason to doubt that Smith and Senator Paine belong to the same party, this movie would seem to be nonpartisan. People of various political backgrounds can see a little of their heroes in Smith and a little of their villains in Jim Taylor. I’m not interested in hashing out any current political debates in this space. Thank you.

Mr. Smith Goes to Washington is a screwball comedy. (Okay, not really, but let’s do an experiment and say it is. It will be illuminating, I promise.) Frank Capra may be most famous for his earnestness, but my appreciation for his talents as a director of comedy has grown tremendously over the years. In 1939, when he made Mr. Smith, Capra had already won three Oscars for Best Director, an unprecedented feat (the Oscars were only ten years old at the time). The three movies for which he won — It Happened One Night, Mr. Deeds Goes to Town and You Can’t Take It With You — are all considered classics of the screwball comedy genre. Capra’s screenwriter for Mr. Smith, Sidney Buchman, had written romantic comedies like Theodora Goes Wild and Holiday. Mr. Smith‘s cast is populated with a veritable army of great comedic character actors, actors who also appeared in comedies by Howard Hawks, Preston Sturges and others. It’s no surprise that the movie is often very funny.

However, much like Capra’s It’s a Wonderful Life, the extent of the humor didn’t begin to sink in for me until I’d seen the film more than a few times. Some examples are obvious: the governor, played by Guy Kibbee, is a clown; many characters display fast-talking wit; there is some slapstick involving Eugene Pallette. When I saw the film again recently, though, I was given the impression that the humor, whether intentionally or not, doesn’t stop there and in fact continues into the film’s climax. How else are we to respond to the Taylor political machine’s strong-arm tactics against Jefferson Smith’s Boy Rangers and their little truth-telling newsletter? We laugh, right? Otherwise, it’s the most terrifying thing in the world. And then there’s the most crucial incident in the film, Smith’s filibuster. Political scientists may be able to convince me that the filibuster is a useful tool, but until they do it just seems exceptionally silly to me. Surely we can all agree that the way the idea is treated in this film supports that conclusion. Smith just keeps talking for the sake of talking, in order to delay his own expulsion from the Senate until the Taylor machine’s corruption can come to light. His increasing exhaustion and despondency are tempered all the way through with jokes. The humor here serves as a dark undercurrent to the film’s high-minded patriotism. Smith may be noble, courageous and pure, but he also has no idea how to be a senator and yet was duly appointed to that position. 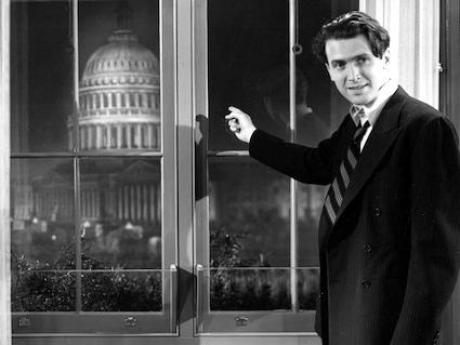 But let’s not kid ourselves here. Capra wasn’t making a satire, at least not all the way. He clearly sees Smith as a hero, and he convinces us to see Smith the same way. It doesn’t hurt that he cast James Stewart in the role, an actor who could portray authenticity, humility and rectitude like few others. Capra has a lot of fun with cynicism and jadedness as an ethos, but he always balances those things with a boyish sense of wonder. So the images of Smith on his unannounced tour of Washington, gazing reverently up at the statues of the American idols, are intercut with shots of all the people looking for him, most of whom imagine him to be already disillusioned and drunk somewhere. Smith’s sappy patriotism inspires various characters to roll their eyes, but he consistently gets the last laugh. Capra has his cake and — lo and behold — he also eats it.

The character who epitomizes this conflict between earnestness and cynicism is Smith’s secretary Miss Saunders, played by the top-billed Jean Arthur. I’ve always been impressed with Stewart’s work in the film — no actor can wreck me emotionally like he can — but Arthur pulls off a trickier performance. Her character is something of a Manic Pixie Dream Girl, coming into the film exclusively to teach Smith how to be a senator and later encourage him not to back down when the going gets tough. She also falls in love with him, maybe, sort of (I adore the light touch given to the romance in this film). But she’s really the movie’s conscience, a conscience torn between her knowledge of how the sausage gets made in politics and the ideals that brought our government into being in the first place.

Her pivotal moment comes in a scene that is a great example of both Arthur’s masterful acting and Capra’s skills as a director. The scene is a conversation over drinks between Saunders and the reporter Diz Moore (Thomas Mitchell). It’s an uninterrupted, three-minute-long take showing both characters sitting across from each other at a table. Saunders realizes that the naïve Smith is being manipulated by Taylor via Senator Paine via Paine’s daughter. The camera pulls in closer as she reveals how deeply touched she is by Smith’s idealism, but on the perfect emotional beat, the camera pulls back and she deflates the sentiment. Her conclusion is that she has to quit and leave Washington, but first she must open Smith’s eyes, and this becomes the domino that tips everything else over. It’s a wonderfully written scene, and Mitchell is terrific in it, but Arthur dominates the shot anyway, with her magnificent voice and line delivery, the way her eyes move, and the way her veil flutters when she speaks. I don’t know if anyone else could have made that scene so funny and tender at the same time.

It’s tempting to look back on this movie with nostalgia — a nostalgia for Movieland, since the American political system’s problems have likely always been more serious than this movie’s ideas about them. Perhaps a Senate in which Jefferson Smith can have a positive influence is a utopia, and perhaps the movie itself understands this. On my most recent viewing, it occurred to me that the film ends very abruptly, with Smith unconscious and Paine (Claude Rains, who was born to play a politician) fresh off a suicide attempt but prepared to vindicate Smith’s integrity. The full repercussions of Smith’s actions are deliberately left unknown. What about that deficiency bill? How many good things in it will have to be delayed indefinitely now until this whole Taylor mess is sorted out? Will it have been worth it? Does Smith still have a future in the Senate, especially now that Paine probably won’t continue to serve? Frankly, I don’t have the heart to ponder these questions for very long, and I think Capra was aware of this. We’re treated to the reassuring lesson that even in a complex world, sometimes simple virtues can make a difference. Sometimes those simple virtues, and the words we have to express them, are the only weapons we have, but they might just be enough.

2 responses to “My Favorite Movies: Mr. Smith Goes to Washington”