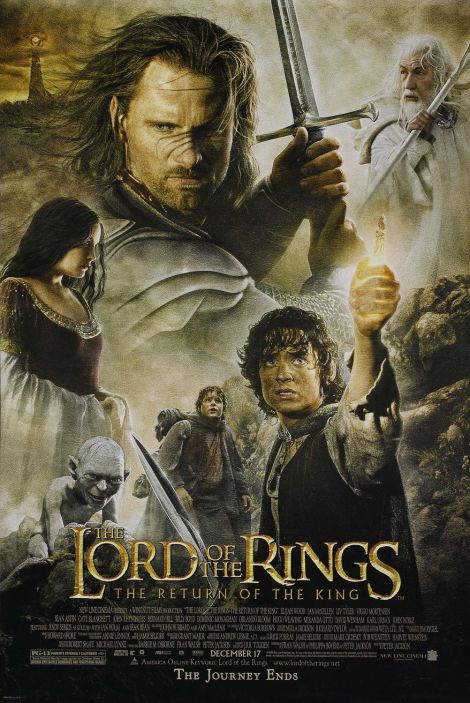 It might not even make sense to judge these movies individually, as opposed to three parts of a single, very long, movie. So much of the emotional wallop contained in The Lord of the Rings: The Return of the King is a result of the groundwork laid in the previous installments. The Fellowship of the Ring may in fact be the best film in the trilogy, with its strong character development and well-paced introduction to Middle-Earth. But I still prefer Return of the King because of this cumulative effect — the sense that the ending of a great movie tends to be the best part. The common criticism of the film, that it’s essentially just a third act, is true. But what a third act! This is a work of symphonic majesty, with a central enormous battle that unfolds in four movements. It isn’t just a grand spectacle, either. The film’s ambitious cross-cutting unites the acts of kings and nations with the private agonies of three small individuals navigating the land of perdition.

Let’s first look at what the film accomplishes on its own, and then what it inherits from its predecessors.

The battle for Minas Tirith, in all its exhausting length, is a beauty to behold. Peter Jackson and company were clearly going for the ultimate depiction of fantasy warfare, and they succeeded. Eleven years later, nothing else compares for sheer scope and authoritative force. Rohirrim charge down a hill with thundering momentum. There are plenty of swords and arrows, but each side in the conflict also enlists the aid of gargantuan animals and even the undead. The convenient timing with which each set of reinforcements arrives on the scene may rob this sequence of suspense, but it also gives the battle a dramatic structure and rhythm. There’s no confusion about what the action of any particular moment means to the outcome. Everything is rendered skillfully. This film contains the most impressive usage of CGI I’ve ever encountered. Not only does it convincingly portray gigantic elephants sweeping aside ranks of soldiers with their tusks, it also creates arguably the most compelling character in the story.

If I didn’t find Gollum as fascinating as I do, I wouldn’t like these films nearly as much. He’s the key to the whole thing — living evidence of the ring’s malignant power, and the best example of a character torn between good and evil. After all, the general approach to character in these films is simplistic. Ugly people are villains, pretty people are heroes. Short people are comic relief, tall people bear the weight of the world on their shoulders. Gollum, while short and ugly, can display characteristics of the other categories as well. In a stellar cast, most of whom don’t get to do much in this film, Andy Serkis stands out for his pioneering motion-capture performance. Because this performance works, I’m able to buy the pomposity of the film’s climactic moments.

We can’t forget Frodo and Sam, either. This love triangle (far more effective than the one involving Aragorn, Arwen, and Éowyn) was first developed in The Two Towers. Frodo, following Gandalf’s advice, takes pity on Gollum and welcomes him into their company. But under the influence of the ring, Frodo slowly becomes more and more like Gollum himself, and therefore drifts away from Sam. These shifting alliances are the subtlest element of the films. The subplot culminates in the most effective bit of suspense-horror in the trilogy, as the hobbits do battle with a giant spider. The valor Sam displays in this scene is both inspiring and quite believable. It sets the stage for the emotional and narrative climax, when Frodo and Sam reach the cusp of their destination, only to meet Gollum one last time.

There are elements of Tolkien’s universe that, over the course of nine hours (let alone the 200 minutes of Return of the King), can only be hinted at. One of these is the story’s long view of history. The main plot is the reckoning of events that occurred thousands of years in the past. Methuselahs of various shapes and sizes wander around all over the place. In Fellowship of the Ring, Gandalf combs ancient archives for details about the ring, and in what is probably that film’s most famous image, the fellowship gazes up at a pair of colossi — our first real glimpse as to just how long this civilization has been around. The prologue to Return of the King glosses the centuries-long transformation of Sméagol into Gollum in a few minutes of screen time. Details such as these are enough; the imagination can run wild trying to fill in the rest — or, of course, it can run to Tolkien’s other writings.

In addition to the vast stretches of time at play in this saga, there are vast geographical distances. Again, the first film is probably the outstanding portrayal of Middle-Earth and its real-world stand-in, New Zealand. The mountains, forests, and rivers of that film are breathtaking. Considering the fact that much of Return of the King takes place in a large field in front of a stone city, and otherwise in a dark wasteland, it shouldn’t be surprising that there isn’t quite as much natural beauty to be seen this time around. However, there’s still the sequence in which beacons between Gondor and Rohan are set ablaze as a distress call. This trek through snow-capped mountains, driven by Howard Shore’s rousing music, is as eye-popping as anything in the trilogy. Minas Tirith itself has always fascinated me — the seat of human civilization placed tantalizingly close to Mordor. A sign of gallantry, perhaps, but more importantly it symbolizes humanity’s tendency to flirt with evil.

If it’s true that the third film of the trilogy can be described as a series of resolutions to conflicts that were carefully established in previous films, it can also be said that those films were merely the setup, and Return of the King is the long-awaited payoff. Here we see the great battle brought to awesome life — Tolkien’s allegory of the Second World War retold, fortuitously, as the definitive statement of the early days of the War on Terror, when victory seemed eminently achievable. Another blockbuster trilogy would arise in the second half of the decade to capture the dark side of that conflict, but I still respond strongly to Jackson’s vision because of the way it also connects to me personally. The Lord of the Rings films coincided with my early adolescence, and as they told the story of the passing of an age, so I experienced the passing of childhood. About the film’s notorious multiple endings: I can forgive them. Some of the closing vignettes should have been cut, to be sure, but I sympathize with the desire to give all our heroes a curtain call (or two, or three). Getting to the end is a hard thing.