The co-inventors of cinema were the Americans and the French. Today, for much of the world, Hollywood is the shining epicenter of moviemaking, but when it comes to serious film culture, Paris is the place to be. Or so I’ve been told. Someday I’ll get there myself. For now, I’m content with seeing the Eiffel Tower on film, as I have a number of times over the past month. My French New Wave retrospective has come to an end, and it’s time to take stock of what I’ve learned. The “Frenchness” of the films is impossible to deny — continental sophistication bumping up against societal changes that would find their way across the Atlantic later in the 60s. The New Wave filmmakers were determined to be contemporary and relevant, with the Algerian War making an impression in several films as the most significant political event of the era. But these movies are just as notable for their interest in cultural imports from America. The Cahiers du Cinéma critics had spent the previous decade celebrating such disreputable Hollywood genres as westerns, musicals, gangster movies and films noir. Then they put that same “cinephilia” into their own movies.

What’s most exhilarating about this period is the willingness to embrace all the possibilities of the art form: Hitchcock and Shakespeare, realist drama and musical comedy, Academy ratio black-and-white and widescreen Technicolor. Underlying this eclecticism was the conviction that cinema was its own thing; that it didn’t need to imitate literature or theater to earn respect; that the moving image in and of itself was artistic. This idea, coupled with the concept of the director as the primary artist, the primary personality behind most films, has been the foundation for film study and criticism ever since. And as Godard once put it, the best way to critique a movie is to make another movie. Here are my ten favorite French New Wave films.

This movie is unique for the movement in that it’s a story about boys, not about men and women. Truffaut’s keenly observant, wistful, and partially autobiographical film culminates in a signature New Wave gesture: a character looks directly at the camera. The freeze-frame of Antoine Doinel on the beach is a study in contradictions. The boy is at once free and trapped; he’s not being pestered by authority figures but he’s also at a loss where to go next; his supports have been kicked out from under him but the future is an open book. 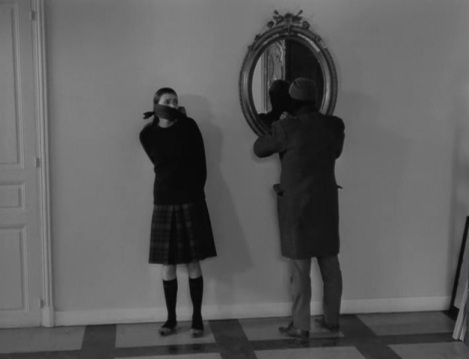 Pulp Fiction wouldn’t be the same if this movie didn’t exist. Here Godard brings to completion the desolation of the gangster hero that he began with Breathless. The two crooks wear Anna Karina’s stockings over their faces when they attempt the heist, a choice that is all at once sensual, romantic, tragic, threatening, cool, and silly. All Karina gets out of the deal is (wait for it) cold feet. In between, Godard stages a dance sequence that, for all its everybody-join-in simplicity, positively electrifies the film.

Godard would return to the basic dramatic constructs of this film in two much more serious films, Contempt and A Married Woman, but for now he’s content to make a film that can laugh it all off. The results are ecstatic — a “musical” that’s overjoyed with artifice. This might be Godard’s slightest masterpiece, but there’s nothing wrong with that. Anna Karina’s song, with filtered light bathing her in primary colors and the background score dropping out as she begins to sing, is a moment of staggering vulnerability.

With a story that roughly traces the period of the French New Wave, Demy’s sung-through musical captures the highs and lows of the movement. It’s even more colorful than A Woman Is a Woman — this film practically bleeds color — and Demy more than commits to the musical format, whereas Godard chopped up his musical score. Composer Michel Legrand is given free rein, conjuring up a poignant main theme and recitatives that feel both like speech and like music. This film is unbelievably moving without resorting to tragedy.

We’re back in the black-and-white of crime cinema here, but the mix of joy and sorrow is every bit as striking as in a film with a richer palette. The early silliness (a man running into a lamppost, dive bar shenanigans, clumsy henchmen) doesn’t prepare us for the sobering portrait of loss to follow. The climax in the snow is as beautiful as it is brutal. Truffaut is at his best here, directing Charles Aznavour and Marie Dubois toward my favorite romance of the French New Wave, weaving the different tones and moods into a coherent whole.

The filmmaking craft alone is stunning, with scene transitions made up of breathtaking visual rhymes. But what really draws me in is the attention paid to the title characters, shopgirls on the lookout for love, pleasure, and security. Unfortunately, there are a lot of terrible men out there. We get to see all the varieties of terrible through a series of punchy, memorable vignettes, tied together by the presence of a mysterious man on a motorcycle. Henri Decaë’s camera playfully extends the mystery, until a couple sharp turns at the end bring out the truth.

A pointed critique of the vapid sensationalism of blockbusters; an intricate, patient look at the expectations men and women have for themselves and each other; a clinical dissection of sex appeal on film; an outlandish satire of the age-old battle between art and commerce. We’re talking about one of the richest films ever made, period. Turning the Odyssey inside out, this is the story of a man whose home leaves him while he stays put. At times excruciating in its unwillingness to blink, the film does (eventually) find a kind of serenity.

With five words (“maybe even a ghost story”), the back of the Criterion Collection box pointed my thinking about this movie in a particular direction. I want it to be a ghost story — metaphorically, if nothing else. Who’s dead, and in what way, isn’t as important as the general feeling of grief for lost opportunities, the disconnect between souls, and the horror of memory. This movie is a playground for the mind. I was so glad to fall under its spell, and to find that Resnais never breaks that spell until the sepulchral final image. 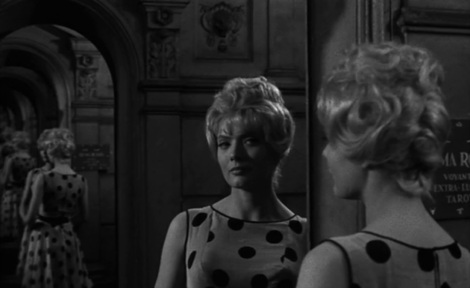 Here is the heart and soul of the New Wave — youthful frivolity crashing headlong into reality in its darkest aspects. An image-conscious pop star expects a terrible diagnosis. We watch her, and she watches others watching her, as she waits to hear back from the doctor. The “real-time” conceit is beautifully thought through, the whole film an illustration of how a short period of time can feel long, and vice versa. It’s no pity party; rather, a vital and heartfelt exploration of its title character’s place in the world.

There haven’t been many times in film history when a single movie came along to declare that the rules had been changed. Experimental filmmaking is always happening, but it rarely has the kind of influence that Breathless has had. This film, with its jump cuts, its handheld shots down sidewalks and up escalators, its metatextual audacity, its arm’s-length approach to plot — simply put, this film paved the way for modern cinema. Jean-Paul Belmondo’s impossible coolness, matched only by Jean Seberg’s ability to see right through it. The intimacy and beauty of Raoul Coutard’s images. The jazzy score from Martial Solal. Godard put the gangster genre through a shredder, and it came out firing.