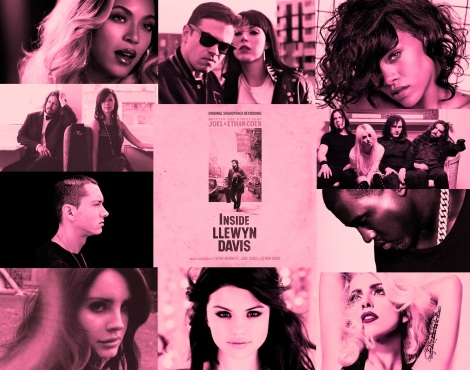 Growing up. Leaving home. Knowing everything. Understanding nothing. Marching to Zion.

Falling hard for someone envisioned as a dance at the brink of an abyss, with Clarence Clemons’ sax to lift it to the stratosphere.

Wailing, furious sample backs Mr. West’s gladiatorial stomp, his infectious urge to just let it all go up in flames.

Primordial love song explosion, layer upon layer of expression from excitement to power to solace.

From Inside Llewyn Davis, a new rendition of a century-old folk song: somber, tragic, transcendent.

There are few singers in the world who could carry off this kind of pop-rock grandeur like Shakira does. With an epically cooed chorus to send monuments crumbling.

2. “If We Ever Meet Again” – Timbaland featuring Katy Perry

I first saw the video for this song in a Motel 6 on the drive home after graduating from college. That’s the kind of coincidence that will make this song’s chorus stick with me forever.

Pop songs seldom display this kind of patience. Perri’s breakthrough hit starts quietly and sadly, only unleashing its full fury in the final minute. “Jar of Hearts” is a musical staircase out of a cellar and back into the light of day. Poetic and poignant, this song, more than any other I’ve heard in the last five years, can leave me emotionally full.