I grew up with an awareness of Arnold Schwarzenegger’s films but very little hands-on experience. Most of his action movies were rated R, and I only considered the Terminator films intriguing enough to risk getting caught sneaking a peek on television. When I finally came of age, I could discover more of the actor’s work in movies not called Jingle All the Way or Batman & Robin. Lo and behold, he’s been in some really good ones! Total Recall is another film that I first caught a glimpse of on TV; this prompted me to buy the DVD some time in the mid-2000s. By this time I knew a little bit about Philip K. Dick, but only from the other movies based on his writing (Blade Runner and Minority Report) that I’d seen. It would be even longer before I started to familiarize myself with the work of the film’s director, Paul Verhoeven. So there are layers of experience here, and this blog series was a great opportunity to see what it all adds up to.

As in Blade Runner, the psychological puzzle of Total Recall involves implanted memories and whether a mind that’s been tampered with can tell the difference between reality and illusion. Schwarzenegger’s character, Quaid, submits to a procedure by which the memory of a perfect vacation on Mars will be etched onto his brain. The procedure fails, apparently, and soon thereafter some people try to kill Quaid. This leads him to a video screen encounter with a man who looks just like him but calls himself Hauser. The recording claims that Quaid’s memory has been wiped and his new identity is a lie. In truth, he belongs on Mars, fighting with the rebels against the evil Martian governor, Cohaagen (Ronny Cox). This story jibes with Quaid’s mysterious attraction to the Red Planet, and since assassins are still chasing him, he grabs the next flight. His subsequent adventures on Mars will be basically consistent with the “secret agent” program he had selected for his memory implant in the first place. On top of that, it later becomes evident that “Hauser” isn’t always honest with him.

On the surface, Total Recall proposes the unanswerable question: what if this is all in his head? That kind of brain teaser isn’t really a priority for Verhoeven, though. The movie is actually pretty linear. (The only sequence I’d describe as “dreamlike” happens fairly early. Quaid asks his friend about the company called Rekall and its memory-implanting process. The friend says he shouldn’t do it, it will cause brain damage. Immediately, with no apparent stimulation in the other direction, the film cuts to Quaid walking into the Rekall office and asking for the procedure.) The attentive viewer can point to incidental clues at various points in the film, but it’s my feeling that Total Recall is happily agnostic when it comes to the nature of objective reality. Quaid is a blank slate, presented with three equally legitimate identities (carefree construction worker, Martian rebel, or Cohaagen’s enforcer), and the choice is his. By the end of the 90s, The Matrix would come around and explicitly reject this worldview, and later still, Inception would riff on it. In Total Recall, it’s mostly window dressing. Philip K. Dick takes a back seat to Schwarzenegger and Verhoeven — extreme violence, puns, and satire on capitalism and the media. 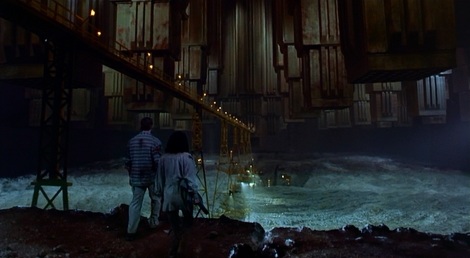 The most notable directorial flourish happens in one of the very first scenes, when Quaid watches the morning news. The anchorwoman deadpans something about Cohaagen’s military quashing a rebel attack with “minimal use of force” over images of rebels getting aerated. A couple swipes at the persuasive power of TV advertising soon follow, with cheesy commercials (broadcast to screens on a subway) convincing Quaid to try, respectively, Rekall and a real space flight to Mars. The bulk of the plot is pretty straightforward dystopian sci-fi — the freedom fighters trying to topple the tyrant who controls and rations a precious resource, not unlike a certain Immortan Joe from a more recent film. Even though I’d already seen this movie a couple times, I’d forgotten just how silly it gets toward the end, with all the alien stuff.

It’s in the final act that the Schwarzenegger influence is most undiluted, with volcanic squibs, dismemberment, and bodies flying through windowpanes. The former bodybuilder is as Olympian as ever, but the movie has Sharon Stone kick him firmly in the balls — twice — as part of an effort to make him seem relatively ordinary. Actually, I take back what I said about this movie not being especially dreamlike. Schwarzenegger’s whole presence lends the film an unreal, or hyperreal, quality. Put Alec Baldwin or Kevin Costner in this role (or Colin Farrell — though I haven’t seen the remake), and I’d be more willing to speculate that all the high-flying action is just wish-fulfillment for Quaid. With Schwarzenegger, though, it’s clear which world feels most natural to him. Maybe everything is a video game simulation, but Schwarzenegger’s persona is sort of a video game avatar anyway.

This most recent viewing was a success, albeit a qualified one. Eleven movies into this blog series on 3-½-star films, and I still haven’t found one I could promote to four stars or better. I enjoy Total Recall, but it leans on a few rote dramatic constructs and expects the “mind-bending” premise to do all the work. Verhoeven does have some fun, though. The shot of the burning “Johnnycab” driver provides the kind of effortless creepiness that Hollywood films don’t seem capable of anymore. Rob Bottin’s makeup effects are visceral and perfect (see also: The Thing). And Michael Ironside is terrific. He’s just playing a henchman, but his charisma completely overshadows the more laborious performance of Cox. On the whole, the movie stays about the same in my estimation, only my mental picture of it is much clearer now.