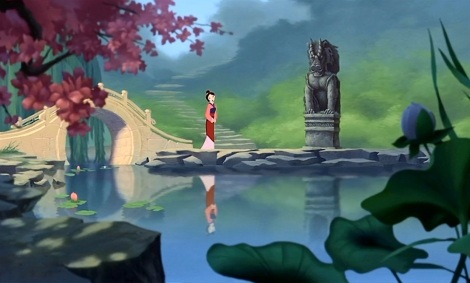 I caught up with this late Disney Renaissance film at some point during the mid-2000s, though I had been very familiar with the two pop singles it spawned back in 1998. It would have been the only animated Disney movie from the 90s that I hadn’t seen yet at that time, so my desire to see it came as much from a sense of obligation as anything else. In 2012, I saw Mulan again in its chronological context with the rest of the Disney canon. Ranking all those films afterwards, I placed Mulan right about the middle of the pack. I considered it a solid effort, but all the films I had especially strong feelings toward were ahead of it. This was my first big movie retrospective, and I didn’t really write anything about the films themselves except for my top 10. So, when I drew Mulan at random this month for my next blog post, I was happy for the chance to work through why I feel a little lukewarm about it.

Fa Mulan, based on the legendary Chinese warrior from circa A.D. 500, is an assertive female protagonist firmly in the post-Belle tradition of Disney movies. Her problem is an identity in flux. She doesn’t have the enthusiasm or poise to take on the passive feminine role in her rigidly demarcated society. Therefore, she’s left with no idea how to fulfill her purpose and bring honor to her family. Until, that is, a Hun invasion prompts universal conscription. Mulan’s father proves too hobbled to fight, so she decides to sneak off in his place. Disguised as a man who calls himself Ping, Mulan successfully joins the army. Empowerment ensues.

The first couple times I saw this film, its very late-90s brand of spunky feminism struck me as a little trite and decidedly anachronistic. That’s all true, of course, but I might have been trying too hard to see the film from a Chinese perspective (a perspective that I, it should be noted, do not actually have). I know next to nothing about the original legend, but it bothered me that Disney, in telling a story about the primitive gender politics of an ancient culture, felt the need to transplant that idea to the other side of the globe. A woman who defies conventions by passing as a man and fighting in a war could have just as easily been European. It was admirable for Disney to branch out toward non-European cultures, but I thought the perspective was too Western, too judgmental. Whatever lessons were being conveyed seemed awfully pat.

On closer inspection, Mulan does a decent job bringing Han Dynasty China to life. Yes, an exchange like this — “I should have prayed to the ancestors for luck.” “How lucky can they be? They’re dead.” — is deliberately out of place, but in general the honor-based culture is portrayed gracefully and subtly. The use of rockets in the battle scenes and fireworks in the climax is historically premature by several hundred years, but I don’t have the expertise to parse that distinction. The technology functions thematically as an example of China’s proud history, an easy way to contrast the great civilization of the East with the barbarian Huns. Now that I think of it, the Great Wall as it appears in the opening scene is also much more modern-looking than it would have been at the time. So this isn’t the place to go for a history lesson, but it’s pretty effective as a crash course on the good and the bad of imperial China.

Beyond the cultural study, though, as well as the unexpectedly fluid take on gender roles, Mulan ends up being a pretty exhausted latter-day example of the Disney Renaissance formula. The three goofy animal sidekicks don’t really do anything that goofy animal sidekicks hadn’t done before, the songwriting is generally forgettable, and the villain is a cipher. Mulan herself is the film’s best asset, more skittish than Belle but less lovesick than Ariel, and ultimately more resourceful than any of the men around her. My favorite bit of animation in the film is the unruly strand of hair that spills across her forehead when she’s at her most comfortable. It’s a look that isn’t appropriate either for the immaculately poised bride-to-be or the manly warrior, and indeed Mulan takes on both roles out of a sense of obligation. She’d much rather be something else; what, exactly, she doesn’t know.

Mulan is an important film to expose children to, bridging the gap with a foreign culture. Though the title character often sounds and behaves more like a twentieth-century American woman, her very accessibility might be what it takes to get children to engage with something so far removed from their experience. As executed, though, the film doesn’t transcend basic competence. The plot moves through all the expected progressions and never really thrills or surprises me. It will keep its star rating by the skin of its teeth.