My seventh year of blogging rolls along to its conclusion, and I’ve already broken my previous record for current-year movies viewed. (My total as of this writing is 69 movies from 2017, which is very nice indeed.) The acquisition of a MoviePass card is partially responsible for this, though I’ve caught up with more than half that total on smaller screens. There are still some major releases with which to catch up, to be sure. But I’ve seen seven of my ten most anticipated movies from this year. Of the remaining three, Darkest Hour will be in my neck of the woods starting this weekend, Mary and the Witch’s Flower in January, Last Flag Flying never (though it will show up at my local Redbox eventually). This time last year, I’m sure I could have predicted that the middle of those three would take a bit longer to arrive stateside, but have I learned my lesson? No, there are three international films on the list below as well. I will see them when I see them.

Next year’s brood of films looks promising. I decided to keep the list free of either Star Wars or superheroes — the first time I’ve ever managed that. The flagship episodes of the former still merit placement, but I can’t muster much anticipation for the spin-offs. Meanwhile, I’ve become a snobby cliche about comic book films. I can place the Great Sag pretty precisely: when Avengers: Age of Ultron came out, and Marvel Studios immediately directed the public to get excited about another, quasi-Avengers film to be released a year later. I concede, there’s no way I’m going to skip either Black Panther or Infinity War, and the initial teaser for the animated Spider-Man: Into the Spider-Verse looks pretty cool as well. But I wanted to branch out beyond the stuff that any entertainment website would highlight, for goodness’ sake.

Even with those movies out of the way, there are a few others that just missed the cut, including Joe Cornish’s The Kid Who Would Be King and an adaptation of Shirley Jackson’s novel, We Have Always Lived in the Castle (a book I will endeavor to read beforehand). The most honorable mention goes to The Other Side of the Wind. Truly, this movie should be number one on any most anticipated list, but I’m not sure whether to think of it as a 2018 film. You see, it was shot by Orson Welles in the 1970s, but only now, long after his death, is it being assembled into a complete film (edited by Bob Murawski, who was just a kid during principal photography). Netflix has the distribution rights, so as far as I can tell, this thing is really going to happen. It could be a strange beast indeed, but “unmissable” is an understatement.

Excluding those, here are the ten movies, in alphabetical order, that I can’t wait to see in the coming year. 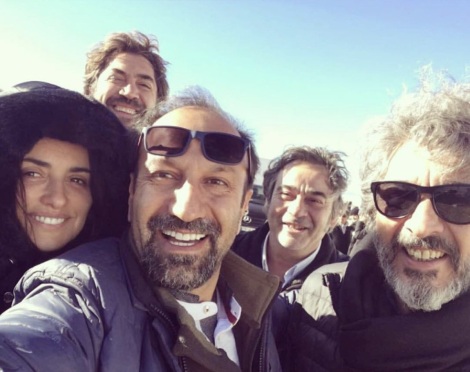 This will be Iranian director Farhadi’s second European film. Everything I’ve seen from him has been good-to-great, so it will be interesting to see him stretch himself into a different cultural milieu. The vague plot descriptions floating around certainly sound like every other movie he’s made, but that blueprint is rock-solid.

There was a certain amount of political blowback to this movie when it was first announced, seeing as it can be described as the ne plus ultra of the self-congratulatory Great Man Biopic (Gosling is playing Neil Armstrong). But I was sufficiently delighted by Chazelle’s La La Land to raise my hopes for this film. And who doesn’t love the Apollo missions, at least on the level of drama?

I can’t say I’m “prepared” to wallow in whatever horrorshow provocation von Trier is cooking up. Who can be? I just know that a serial killer story is right up his alley.

At this point, it’s still possible that this movie won’t appear until 2019. Shooting is in progress, though, and with Netflix as a distributor, I wouldn’t be surprised if things progressed more quickly than that. In any case, this is a Scorsese crime film with De Niro and Pacino. If its status as a direct-to-streaming movie signals the full flowering of a new, tawdry era in film history, what of that? The guy just made The Wolf of Wall Street and Silence back-to-back.

This is one of two movies on my list for which a trailer is already available, and that footage certainly played a role in recommending it. The thing looks wry and wonderful. It’s Wes Anderson’s return to stop-motion animation, with a pretty stellar voice cast.

Besides The Other Side of the Wind, this is by far the longest-anticipated film that will, allegedly, finally be released next year. Gilliam’s twenty-year quest to get this film off the ground is so well-known there’s a documentary about it. A certain adjective springs to mind. Nevertheless, with principal photography complete, nothing can stop him now, right?

I’m always up for an unusual take on Shakespeare, and the cast is definitely strong enough to overcome my lack of familiarity with the director.

Malick has become a mainstay on these lists of mine. Starting the decade with something like The Tree of Life will do that, and his latest film, Song to Song, is in my opinion his most satisfying since that masterpiece. Considering the unpredictability of the post-production schedule on a Malick movie, his second World War II film might not be done in time to arrive next year. On the other hand, it’s been suggested that this will be the director’s most structured work in a long time, so the final cut might arrive sooner rather than later.

Cuarón’s first film made in his native Mexico since Y Tu Mamá También, and only his third overall, will mark quite the departure from his previous three films. It’s going to be a period piece family drama, with (presumably) no wizards, speculative dystopias, or 3D visual effects.

With Disney’s track record of flattening children’s and young adult fantasy so the idiosyncrasies are hard to find, there’s reason to be skeptical about this one. DuVernay is a skilled director, but I’m honestly not sure how well she’ll take to this material. I remain hopeful, though. At the very least, the Madeleine L’Engle novel on which this movie is based is a treasure trove of good ideas, so writer Jennifer Lee (Wreck-It Ralph and Frozen, both entertaining movies) probably had some fun adapting it.

2 responses to “My Most Anticipated 2018 Movies”