Even before I really knew much about movies, I had a strange pride in the ones that came out in my birth year. There was a sense of ownership over them, even though I’d only seen a few. In reality, of course, those movies exist in the blind spot of my personal experience. I can only claim a Wikipedia-level knowledge of the cultural context, and no factoid could be more insignificant to my life than which films were shown in theaters at that specific time. Nevertheless, I’ve got them all down now. Thanks to this retrospective, I am more familiar with the cinema of 1987 than I am for any single year before 2014. Even so, there are at least a dozen major films from 1987 that I haven’t seen yet.

So what can be said about the movie selection in the St. Louis area during the weekend that Three Men and a Baby and Planes, Trains & Automobiles opened? It should come as no surprise that many of the options were mediocre. I consider three stars (6/10) to be a reasonably positive rating, and I only awarded that rating (or higher) to twenty of the forty-six movies. But that’s plenty of good choices for any normal person. (And besides, I wouldn’t treat as gospel my negative first impressions of, say, No Way Out or I’ve Heard the Mermaids Singing if I were the discerning reader.)

Young people are frequently at the center of these films, in the form of either hooligans or yuppies. “Just Say No” emerges as a common concern, with drugs destroying lives in Death Wish 4, Fatal Beauty and Less Than Zero. For me, what elevates movies like The Hidden, The Lost Boys and Near Dark above those is the way they sublimate the idea of drug use into familiar genre elements, whether aliens or vampires. Three Men and a Baby, meanwhile, incorporates a drug deal for humorous effect. There are some rather ghoulish/macabre comedies in this bunch, with a lead character near death (Date with an Angel), or already dead and brought back (Hello Again), or forced to live as though she’d never been born (Maid to Order). There are science fiction media satires (RoboCop, The Running Man), stories in which cops fall in love with people they’re monitoring (Someone to Watch Over Me, Stakeout) and legal dramas in which last-minute replacement attorneys have to get through to mysteriously difficult clients (Nuts, Suspect). Good or bad, I was invested in watching almost all of these, and I’m glad to have done so.

Before I return to my regularly scheduled movie-watching, here are my ten favorites from this retrospective, six of which I just saw for the first time. Head over to Letterboxd to see my top-to-bottom list for this eclectic group.

A truly, simply enjoyable film that managed to hang around the top of my list while a dozen more ambitious works fell short, The Lost Boys combines hormonal awkwardness with a boys’ own adventure tale. The gargoyle makeup for the undead (later mimicked on Buffy the Vampire Slayer) is just one example of how this movie really goes for it, to mostly positive results.

This is still one of Bigelow’s most acclaimed films, and after my second viewing I have a better grasp on why. Its outlaw spirit and romantic fatalism are very cool and quite rare for the genre. The director certainly knows her way around a violent image, as well, from a throat slit by spurs to young bodies flaming in the sunlight. The drug analogy is spelled out at one point, but this whole story is such a rough time for the protagonist that I don’t see how anyone could miss those implications.

Carpenter’s bizarre fusion of science and religion, a manichean syncretism, is ultimately a footnote to the pure experiential thrills of this movie. He gets to play with so many different genre toys: time travel, telepathy, interdimensional portals, mind control, and on and on. It’s all carefully wound up, with judiciously placed demonic portents leading these foolish characters to the inevitable. This is a late entry in the Rosemary’s Baby/The Exorcist/The Omen genre, but it’s entirely Carpenter’s own.

A nostalgic look at a more carefree time that’s all too happy to throw chronology out the window for its Oscar-winning song (thus creating another layer of nostalgia for us some thirty years later), Dirty Dancing is certainly cliched, but I feel it’s smart in the way it handles its cliches. The young protagonist latches onto a cause that feels immediate and worthwhile, not pie-in-the-sky. And the restoration of the parent-child relationship after a major crisis feels well-earned. And she carried a watermelon. 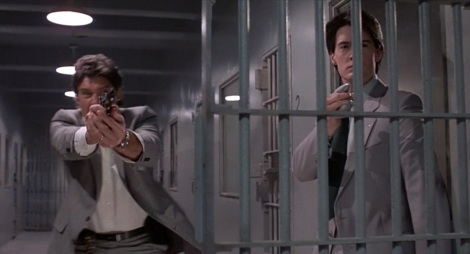 This is a deeply strange, sometimes baffling science fiction cop thriller. It’s also a very technically accomplished film, all the way from the opening security camera shot to the unsettling semi-happy ending. There are elements of bodily possession and super-powered criminals that nicely synthesize all the sci-fi and horror on this list. This is the foundational Kyle MacLachlan character and performance, as an FBI man who hesitates to explain to the local police what’s happening because, hey, who’s going to believe that?

As far as concert films go, I’ve only seen a handful of the classics, but I think this one rises to the level of true transcendence. It’s a total music experience, with genre-hopping selections from Prince’s most ambitious album. Scattered scenes in a fairy-tale city transform the concert stage into a dreamscape, or perhaps it’s the other way around. Every performer is a stone-cold fox, and the whole thing is a feast of color and energy, working its magic in under an hour and a half.

The contemporary review in the St. Louis Post-Dispatch called this movie a clever satire in spite of its baroque violence, somehow missing the connection to Reagan-era excess (both in real life and in action movies) that is Verhoeven’s entire point. Anyway, the subversion hasn’t aged a day, and the technical filmmaking chops are a balm amid all the hack work in cinemas at the time. The battered mechanical messiah at the center of it all is somehow both the ideal cop and a reductio ad absurdum for the whole enterprise.

Here you get a pretty good idea of just how well I regard all the movies in this bunch, because I consider Cinderella to be second-tier Disney at best, but it still rises above almost anything else playing in theaters the weekend after I was born. Even if the animation isn’t as maniacally fastidious as in Disney’s first features, it’s still incredibly gorgeous. The emphasis on anthropomorphic animals isn’t the most adventurous choice for this medium, but it’s rarely been done better. It’s a strategy so particular to animation that the live-action remake, thankfully, didn’t dare to steal it. I’ll never get over how much peril poor little Gus-Gus endures.

Each and every scene feels right — a masterful semi-autobiography about growing up in war-torn London. The fate of the world was up in the air; consider yourself lucky if you were just slightly too young to recognize that. Boorman skirts both sentimentality and cynicism in favor of eye-opening truth. The characters’ enthusiasm for life survives the bombs not so much because of the innate power of goodness but because England was fortunate enough to survive World War II intact. This movie needs to become more readily available on video, considering I rank it higher than any other Best Picture nominee from its year. I might be wrong, but I couldn’t be that wrong.

My appreciation for this film has diminished a little over the years, but still not enough for anything else from 1987 to challenge it. The mix of earnestness and sharp humor remains dazzling: never mind that Cary Elwes and Robin Wright could be twins, it’s breathtaking to see his lacerating quips followed up by her spilling her heart out in an equally cutting fashion. Everything to do with the poisoned goblets and the paralyzed hero is comedic gold, and the swashbuckling is energetic. Celebrity guest stars steal the show, but I’d like to give special notice to the terrified look on the face of the soldier played by Malcolm Storry (just barely visible above) when the castle portcullis is forcibly raised by a giant. The Princess Bride is gently amusing from start to finish. A better movie to welcome me into the world is not to be conceived.