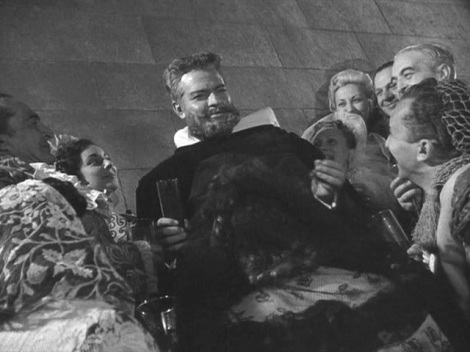 The coolest thing I’ve learned this year to date comes from One-Man Band, the third volume of Simon Callow’s definitive Orson Welles biography. I finished reading it back in June, but one anecdote in particular has stuck with me all this time. There’s a brief monologue in Welles’s film Mr. Arkadin in which the title character, played by Welles himself, recounts a fable. A scorpion asks a frog to carry him across a river. The frog is worried about getting stung, but the scorpion points out that if the frog dies, the scorpion will drown as well. They proceed, but halfway across the river, the scorpion stings the frog anyway and offers an illuminating reason for doing so. I saw Mr. Arkadin a few years ago and remembered this story, but Callow makes a fascinating assertion about it. He writes that the fable is “often attributed to Aesop, though it seems to have been entirely original to Welles.” How marvelous, thought I, that such a fine example of seemingly ancient wisdom should have been invented by an American genius, slipping quietly into western civilization as though it had always been there. Here’s the appropriate passage in the film:

There’s just one problem: the fable of the scorpion and the frog is not “entirely original to Welles.” I didn’t have to look any further than Wikipedia to complicate that blanket pronouncement. The online encyclopedia cites a German study that found an antecedent in Persia from around eight or nine centuries ago. In that tradition, the stooge is a turtle, not a frog, and the turtle’s shell protects it from the sting. But the capriciously violent nature of the scorpion is the same in both tellings. Welles was exceptionally well-traveled, so it stands to reason that he might have heard some variant of this tale and adapted it to his purposes. But I’m not even sure that replacing the turtle with a frog was his idea. Mr. Arkadin was released in England and Spain in 1955 but didn’t reach America until 1962, and there are references in American newspapers to the fable that predate 1962. A keyword search on Newspapers.com reveals a column by William Peter Blatty (of The Exorcist fame), printed in the Los Angeles Times in 1958, in which the author passes along the tale from “a former U.S. Ambassador to Cairo.” Both Welles and Blatty, it seems to me, were drawing from the same oral tradition.

It isn’t my wish to throw Callow’s excellent book under the bus for one little mistake. He isn’t altogether wrong, anyway. The fable has indeed been misattributed to Aesop many times in the ensuing years. Furthermore, we can say with confidence that Welles helped introduce this story to western audiences, and that it has since become ubiquitous. Of the 9,000 or so results for my Newspapers.com search, all uses of the words “scorpion” and “frog” that relate to the fable come from the mid-1950s or later. Whereas Welles used the story to illustrate the self-destructive tendencies of an individual, the most common allusion over the years is to politics. Blatty, for example, like many others over the next couple decades, uses a different closing line than Welles. The scorpion doesn’t say, “It’s my character,” or, “It’s my nature,” but rather, “This is the Middle East.” More recently, the tale has been used to describe the Pyrrhic victories of one of the two major parties in the American government. Still more recently, a certain Donald John Trump has inspired comparisons to the scorpion, with the moribund Republican Party serving as the gullible frog — an observation so self-evidently accurate that RedState and the Huffington Post are in agreement.

I found all this out by doing internet searches this very week. What first sparked the idea of writing on this topic was the fact that I’ve been encountering the story organically as well. Two other movies I saw this year make allusions to it: Neil Jordan’s The Crying Game (1992) and Josh Kriegman and Elyse Steinberg’s Weiner (2016), a documentary about the disgraced politician Anthony Weiner. At one point, the subject of the latter film references the frog and the scorpion to describe his relationship with the media. Here the political merges with the personal. Indeed, using the story to describe interpersonal relationships is still common. Depending on whom you ask, either men are like scorpions or women are.

I’m still not sure how much credit to give Welles here. On the one hand, it’s a delicious irony that the director’s most Shakespearean penetration of culture should have come from possibly his least-seen, least-remembered, and least-loved film. On the other hand, maybe it’s so ironic that it strains credibility. In any case, this might be the one part of his legacy, earned or not, that stands the best chance of surviving into the distant future. In a couple hundred years, the films of the twentieth century may be lost and irrecoverable, a technology that can no longer be accessed. How long until praising something as “the Citizen Kane of (blank)” loses all meaning? The War of the Worlds radio broadcast is the most lasting example of American mythology to emerge from the mass communication era, but the circumstances of that event might be too specific to retain their force. Only with the tale of the scorpion and the frog did Welles tap into time-honored truths not connected with a specific author (unlike the director’s Shakespeare films). Human nature is the same today as it was hundreds of years ago, and it will remain the same hundreds of years from now. So the two critters braving the river’s current might be part of our cultural conversation for a long time. The footnotes will fade away; they’ve already begun to do so. But as Welles so eloquently put it in his last great film, F for Fake, authorship doesn’t matter in the long run. The art speaks for itself.

One response to “Stop Me If You’ve Heard This One Before: There Was a Scorpion and a Frog…”